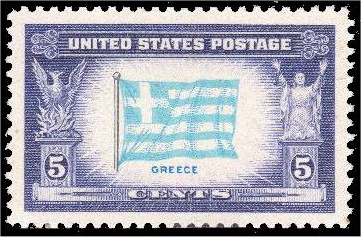 There was a choice of two flags of Greece in the Hydrographic Book, the choice was the “Ensign and Merchant” flag rather than the “Jack.” On August 28, 1943, the die proof was approved. On September 13 the announcement was made that the stamp honoring Greece would be issued in Washington on October 12,1943. On October 4 the first delivery of these stamps were made to the Philatelic Agency and to the Post Office in Washington, D.C., with the first day sale were held at Washington, D.C., on October 12,1943. The first day stamp total was only 497,172 stamps and 166,553 first day covers being cancelled. The Greece stamps were printed on the top half of the printing plate while the bottom portion of the plate was the Overrun Country of Yugoslavia issue, which was released two weeks later.

This was the first of the series to be reduced in quantity. Officials at the Post Office Department stated the reason for the reduction was due to reports from postmasters throughout the country that they had a “...surplus of5 Overrun Countries on hand...” and it was advisable to reduce the printing order.

It was pointed out that if the entire series of 12 stamps were printed according to the original plan of 20 million each, 240 million 5# stamps would result. This was a greater number of this denomination ever issued by the department in one year; the largest was 162 million! Since the start ofWWII,, only 150 million 5# stamps were being printed a year and prior to the war an average of 185 million issues annually.


Dedicated To My Wife Dawn