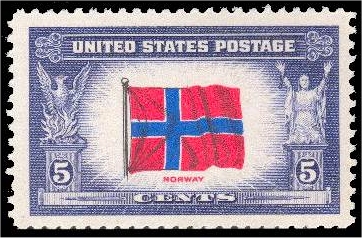 There was a choice of four flags of Norway in the Hydrographic Book and the choice was the “Merchant” flag. On June 25, 1943, the die proof was approved and three days later Postmaster General Frank C. Walker announced the stamp honoring Norway would be issued in Washington on July 27. On July 20 the first delivery was made to the Post Office in Washington and one week later the stamp was placed on sale at post offices nationwide. Ceremonies in connection with this first day sale were held at the White House in Washington, D.C., and in the presence of the Norwegian Ambassador to the United States, William M. de Morgan Stierve, Deputy Assistant Postmaster General Roy M. North, sold the first sheet President of the United States. Other sales that day help swell the first day stamp total to 627,927 and 155,054 covers. It had first been announced that the total of first day covers was only 130,054, but this figure was corrected to the higher total shown above.

The stamps were printed from the bottom half of the sheet and registration markers are found only on bottom strips. About 18% of the entire issue was sold at the Philatelic Agency, where the stamps remained on sale until December 2,1944.


Dedicated To My Wife Dawn